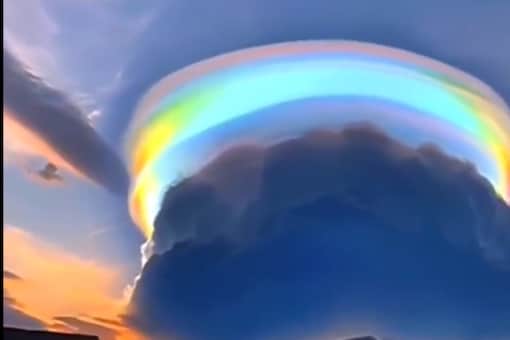 The rainbow-like cloud was an extension of a cumulonimbus cloud. It is called a Pileus cloud, also referred to as a cap cloud or a hood cloud. They are usually formed when a cloud rapidly grows upward and rests in a stable layer above the cumulus, thus creating a rainbow-like effect in the cloud. Usually, this only lasts for some minutes. The original video was shared by the Twitter page Sunlit Rain. “Rainbow coloured scarf cloud over Haikou city in China,” read the video’s caption.

‘What in The World?’: Rainbow-like Cloud Leaves Sky-gazers Stunned in China

Rainbow-like cloud: Chinese city experiences rare phenomenon; What is it?