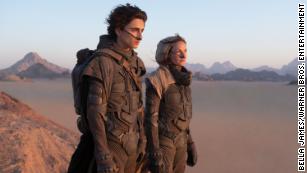 After a lot of waiting, the first trailer for Denis Villeneuve’s adaptation of Dune is finally here. It has an almost impossibly star-studded cast — there’s everyone from Zendaya and Timothée Chalamet to Jason Momoa and Oscar Isaac — along with impressive set design and, yes, gigantic sandworms. But it’s also based on a classic sci-fi novel that’s been infamously hard to adapt for the big screen. Which raises an important question: how does The Verge staff feel about our first look at the movie?

The highs, lows, and epic sandworm cameos of the first Dune trailer

Watch the first trailer for the insanely star-studded ‘Dune’

The long-awaited trailer for ‘Dune’ has been released