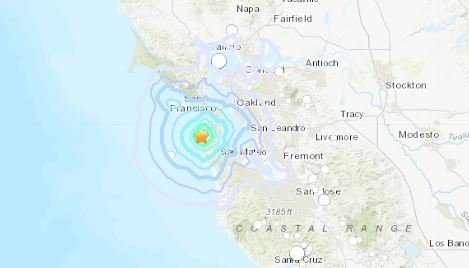 A magnitude 3.5 earthquake Saturday morning rattled residents of San Francisco and communities to the south, the U.S. Geological Survey reported.

The 8:41 a.m. quake’s epicenter was just west of Colma, off the San Mateo County coast, south of San Francisco and also west of Daly City, according to the agency’s map. It occurred at a depth of 3.7 miles.

As of 9 a.m. there had been no reports of injuries or property damage.

The quake also was felt across San Francisco Bay in Oakland, Berkeley, Newark and Fremont, and south In San Jose, according to people posting on Twitter.