Brexit Vote Goes Against Boris Johnson, and He Calls for an Election 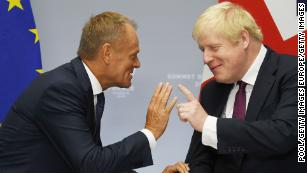 LONDON — British lawmakers on Tuesday rose up against Prime Minister Boris Johnson, moving to prevent him from taking the country out of the European Union without a formal agreement. The epic showdown pushed Britain to the verge of a new election.

After losing his first-ever vote as prime minister, Mr. Johnson stood up in Parliament and said he intended to present a formal request for a snap general election to lawmakers, who would have to approve it.

Brexit Vote Goes Against Boris Johnson, and He Calls for an Election

British lawmakers take control: What it means for Boris, Brexit and Britain