49ers’ Jimmy Garoppolo finished his preseason start vs. Broncos with a 0.0 QB rating 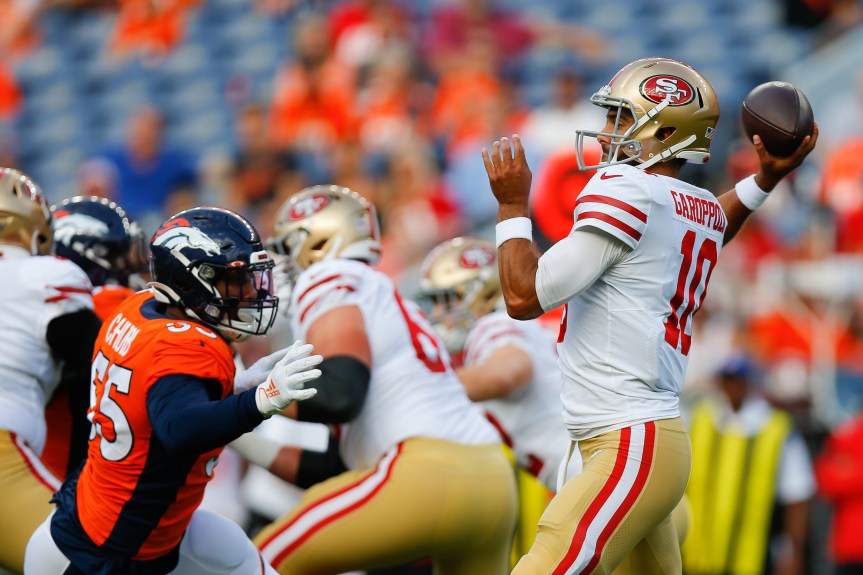 Jimmy Garoppolo may be opening the door for a quarterback controversy in San Francisco. The 27-year-old had a horrific outing during the 49ers’ second preseason game against the Denver Broncos on Monday night.

He left the game in the first quarter with a quarterback rating of 0.0 after completing 1 of 6 passes for 0 yards and an interception on three drives. And he was lucky his stats didn’t look worse. One of his incompletions was nearly picked off for a second interception, but a Broncos defender dropped the potential takeaway.

Yes, it’s only preseason. But often, preseason is when life is easiest for a quarterback, who is reading uncomplicated coverages from a defense that might be lacking some of its stars. In other words, the Nick Mullens hype train is gaining steam.

49ers’ Jimmy Garoppolo finished his preseason start vs. Broncos with a 0.0 QB rating

What We Learned From 49ers-Broncos Preseason Game

For 49ers’ Jimmy Garoppolo, 2019 debut is a disappointment in Denver